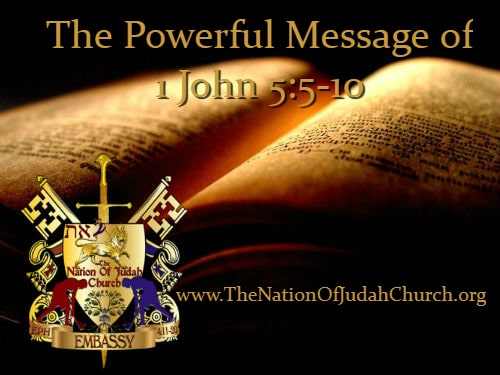 5 Who is he that overcometh the world, but he that believeth that Jesus is the Son of God?

7 For there are three that bear record in heaven, the Father, the Word, and the Holy Ghost: and these three are one.

8 And there are three that bear witness in earth, the Spirit, and the water, and the blood: and these three agree in one.

in these passages of Scripture John proclaims this testimony about Yahshua (Jesus) is absolute and validated. showing He is the Overcomer and the Son of YAHWEH (GOD) and the Record in Heaven and the witnesses on earth. ‘Water and Blood” As believers we have evidence of the truth because the Holy Spirit who is the Spirit of truth that lives in each and every believer.

When we have a true relationship with the Yahshua (Jesus), we experience the love of YAHWEH our Elohim, with evidence of our fruits of the Spirit, and the manifestation of Gifts.

On the other hand, those who do not believe in YAHWEH or His Son Yahshua, John says, are rejecting His truth, which is the same as accusing Him of lying. referencing 1 John 1:10, John noted that the person who says he is free from sin makes God a liar, and shows a lack of truth.

In this case, the unbeliever has not accepted the testimony of God, as believers has, and they may see Jesus as a good person, but do not accept Him as God’s Son or the Savior.

To YAHWEH our Elohim be All the Glory, now and forevermore.