Who Told You That Jesus Abolished the Law Part 1 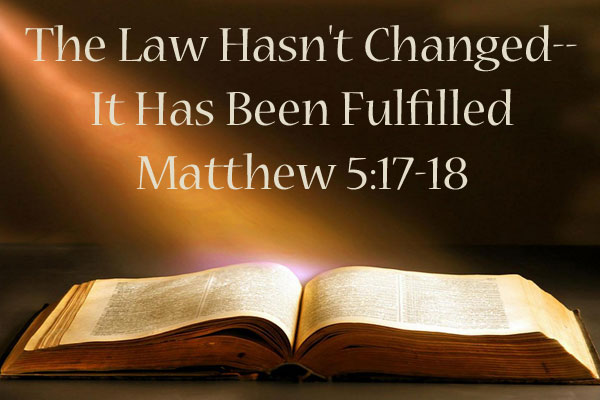 Many professing so called “Christians” believe that Jesus abolished the law, God’s Ten Commandments, on the cross at Calvary. Is this a true statement?

Well, didn’t Jesus actually say Himself that He came NOT to abolish the law? Let’s take a look at that Bible verse. Matthew 5:17 …..’Think not that I am come to destroy the law, or the prophets: I am not come to destroy, but to fulfil.’

So Jesus confirms Himself that His job wasn’t to come and abolish the law, but to fulfil. “Oh but He did fulfil the law, so we don’t need to keep it.”

Do you ever hear a so called Christians saying this? Do you even think it yourself? Jesus fulfilled the law, so we don’t have to keep it? Have you ever wondered what that word “fulfil” actually means?

If you look at the original Greek word for fulfil, it actually means to “fill to the top” or to “cause to abound”. In other words, to bring full meaning to the law, or to exhalt it!

Now for clarity, let’s look at this in the Greek context with the new meaning.

‘Think not that I am come to destroy the law, or the prophets: I am not come to destroy, but to BRING FULL MEANING TO IT AND EXALT IT.’ The prophet Isaiah pointed to this in Isaiah 42:21 ‘The LORD is well pleased for his righteousness’ sake; he will magnify the law, and make it honourable.’

Romans 3:31 says; ‘Do we then make void the law through faith? God forbid: yea, we establish the law.’

Now does that sound like Jesus abolished the law? Of course not. Christ Jesus, in no way, came to abolish the law. He came to give His life for us as a ransom, because as Paul confirmed in Romans 6:23. Let’s look

For the wages of sin is death; but the gift of God is eternal life through Jesus Christ our Lord.

But Jesus also came to show us the true meaning of the law, the ten commandments.

He came to help us understand the spirit of the law, as the Jews only really understood the law in a physical way.

Now many so called Christians will say that they keep the “spirit” of the law, not the “letter” of the law. Well, what law are we keeping in spirit? The Bible or the Ten Commandments?

(John Wesley, The Original, Nature, Property, and Use of the Law. IV.7 states)

Think about this for a moment; If God could have abolished His moral law, the Ten Commandments, or even changed it in any way, then surely Jesus did not need to come and die for us. Why? Well I’m glad you asked! Because God could have just taken away the law, and we would no longer be under the law, and guilty of it. However, God could not do this, because His law, the Ten Commandments, reveals His character.

The Question: Doesn’t Paul say the Law is Abolished?

A Bible verse that is often quoted to suggest that Jesus abolished the law is Ephesians 2:15 reads;

Having abolished in his flesh the enmity, even the law of commandments contained in ordinances.

Now take a look at the word “enmity” in Ephesians above. That word means hatred, dislike, repugnance. So Jesus abolished in His flesh, of the hatred, dislike, and repugnance. What was it that God had such a dislike for? Was it His Ten Commandments, the law of love? No.

Take a look at the following verses:

Psalm 40:6 …..’Sacrifice and offering thou didst not desire; mine ears hast thou opened: burnt offering and sin offering hast thou not required’

Psalm 51:16 …..’For thou desirest not sacrifice; else would I give it: thou delightest not in burnt offering’

Do you see this truth? God did not desire sacrifice and burnt offering; therefore He had a dislike, repugnance for it. God never intended for us to sin and for there to be a need for sacrifice. He’s a loving God!

To see death, even to one of those little lambs He created was repugnant to Him. However, the laws contained in ordinances required such offerings and sacrifice for our sins to be wiped away.

other card offers this

Have a good read through the first epistle of John. In it you will find many references to our love for God by keeping His commandments, because the Ten Commandments are all about love.

If we love God and His Son Christ Jesus, we should keep the commandments. Even during the end times, Jesus revealed through John, in the book of Revelation, that His true followers, His true church, would be keeping the commandments of God.

Revelation 12:17 says; And the dragon was wroth with the woman, and went to make war with the remnant of her seed, which keep the commandments of God, and have the testimony of Jesus Christ.’

Revelation 14:12 say; Here is the patience of the saints: here are they that keep the commandments of God, and the faith of Jesus.’

Why is Satan angry with the woman (God’s church)? Because they keep the commandments of God, including the 4th commandment concerning the Bible Sabbath.

In addition, not only that, but they also keep the faith of Jesus Christ. They don’t just have faith IN Jesus; they keep the faith OF Jesus. They follow in His footsteps.

Did Jesus not keep the Ten Commandments? Yes! Therefore, that means His true church does the same, which is why they are called the saints in Revelation 14 above.

Satan was the first to rebel against God’s law, and he wants us to do the same. Unfortunately, he has deceived so many professing so called Christians into thinking that they need not keep the Ten Commandments anymore. He lied to Eve in the garden and he is lying to the world today, concerning the moral law of God.

Fortunately God has given us His truth through His Word in the Bible and if we open our eyes and hearts and our Bibles to the truth, we will see that Jesus, did not abolish the moral law, the Ten Commandments, rather He EXALTED them!