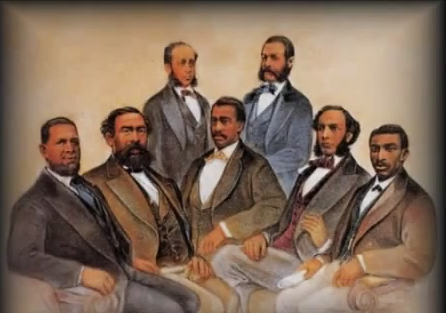 The first African Americans to serve in the United States Congress were Republicans elected during the Reconstruction Era. After slaves were emancipated and granted citizenship rights, freedmen gained political representation in the Southern United States for the first time. White Democrats regained political power in …Please view the below video of the untold history of Black America….You will Be Surprised at what you see and hear!!!

Sen. Hiram Revels, the first African American to serve in either house of Congress.

The first African Americans to serve in the United States Congress were Republicans elected during the Reconstruction Era. After slaves were emancipated and granted citizenship rights, freedmen gained political representation in the Southern United States for the first time. White Democrats regained political power in state legislatures across the South and worked to restore white supremacy. By the presidential election of 1876, only three state legislatures were not controlled by white Democrats. TheCompromise of 1877 completed the period of Redemption by white Democratic Southerners, with the withdrawal of federal troops from the South. State legislatures began to pass Jim Crow laws to establish racial segregation and restrict labor rights, movement and organizing by blacks. They passed some laws to restrict voter registration, aimed at suppressing the black vote.

From 1890-1908, Democratic state legislatures in the South essentially disfranchised most blacks and many poor whites from voting by passing new constitutions or amendments, or other laws related to more restrictive electoral and voter registration and electoral rules. The Democratic Party essentially dominated the “Solid South” until the 1990s. As a result of the Civil Rights Movement, the U.S. Congress passed laws in the mid-1960s to end segregation and enforce constitutional civil rights and voting rights.

During two waves of massive migration within the United States in the first half of the 20th century, more than 6 million African Americans moved from the South to Northeastern, Midwestern and Western industrial cities, with 5 million migrating from 1940 to 1970. Some were elected to national political office from their new locations. During the Great Depression, many black voters switched allegiances from the Republican Party to the Democratic Party, in support of the New Deal economic, social network, and work policies of Franklin D. Roosevelt‘s administration. This trend continued in the 1960s when the national Democratic Party supported the civil rights legislation to enforce constitutional rights. At the same time, there was a different movement among whites in the South, who began to vote for Republican candidates for national and then state offices.

Ten African Americans have served in the U.S. Senate, four in the Republican Party. Two African Americans served as Senators from Mississippi during the Reconstruction Era and one from Massachusetts during the 1960s and 1970s. The remaining seven served more recently: six Democrats, three from Illinois (including Barack Obama) and one each from Massachusetts, New Jersey and California; and one Republican from South Carolina.