MANY ARE CALLED BUT FEW ARE CHOSEN 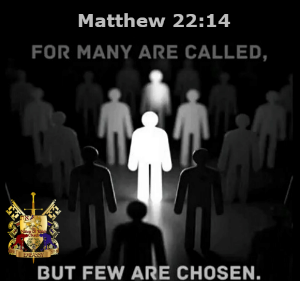 MANY ARE CALLED, BUT FEW ARE CHOSEN.

Most people think this passage of scripture found in 22nd Chapter of the Book of Mathew in the 14th verse has something to do with being called to Preach, or call to Apostleship, Bishopric, become a Prophet, Evangelist or Pastor. That is the farthest from the True,

If you read verses 10-20 it explains what it really means. The Messiah, spoke this parable at the Wedding Feast, when the King sent a man away that was not properly dressed and had his Servants Bind him hand and foot, and the man cast into the outer darkness.

Then the Messiah says, “Many are called, but few are chosen” in reference to He has given an invitation to many, to spend eternity with him in the Kingdom of Heaven, instead of the Outer darkness which is the pit of hell, but only few have chosen his invitation.

And he said unto them, He that hath ears to hear, let him hear.

“MANY ARE CALLED, BUT FEW ARE CHOSEN”. Just let that sink in!

To YAHWEH GOD, BE ALL THE GLORY